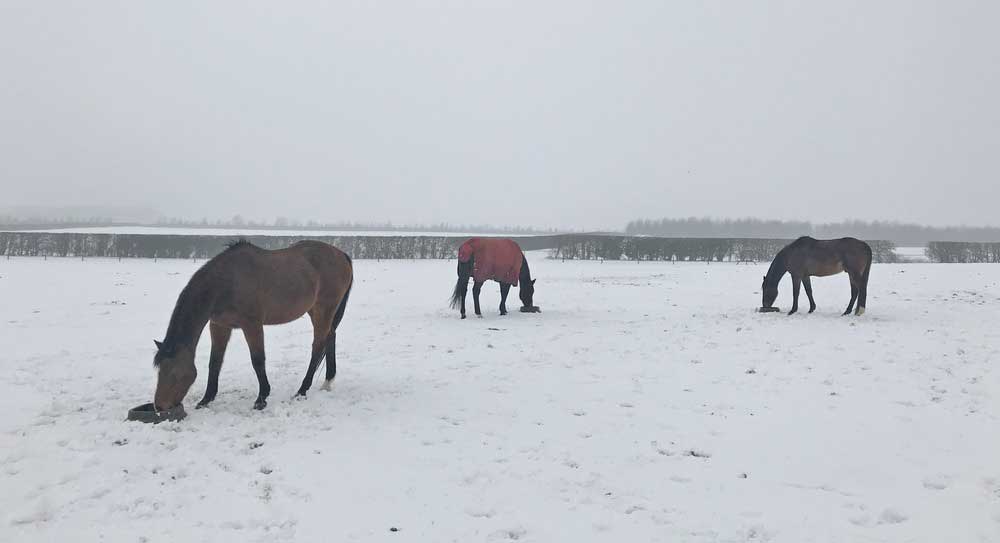 Surviving the snow, dental emergencies and ‘postcards’ from America. There’s never a dull moment for the Equine Management & Training Team.

We are well aware that we are not the most popular of people in terms of social media, but judging by the messages and calls we receive, the posts we make are read and their content is taken on board. This is borne out by the number of people who follow our lead, whether it be in relation to the use of certain products or wanting us to work with their horses.

This of course is good news, as we are constantly working for the good of horses and nothing will detract us from this quest. In this respect the switch to feeding Castle Horse Feeds early last summer has been one of the best things we have done.   Having been on the same feed for a number of years we gradually began to feel that “……. something was lacking”. As we analysed, pondered and researched,  a then little known company was brought to our attention and the rest, as they say is history.  We feel very content and confident that we have the horses in our care in the best possible regime – and the results are speaking for themselves.  We are delighted that more and more people are now also making the switch to Castle Horse Feeds. And what a lovely company to work with, so friendly, helpful and accommodating; good old-fashioned service where every customer is important, whether they have one pony or a yard of 20 eventers.

Ok, so what’s been happening these past weeks? Frustration mainly at the constant rain since Christmas; then of course the snow came…..followed by absolutely torrential rain again.  Thank goodness so much of our land is very well draining, especially as the forecast isn’t looking too great once again!  Nonetheless, Spring has sprung with the garden showing colour, the hedgerows bursting out and bird-song filling the air.

Fortunately, the weather has not had a negative impact on the 3 ex-racehorses we have living out. Granted, one does have a medium weight rug on as he was turned out late Autumn having come over from Dubai in the Autumn, but the other 2 are naked, even though one is 23. We are very pleased that they have wintered extremely well, despite the endless rain. Horses that live out during the winter months must be kept well-fed to ensure they maintain weight, as weight-loss in winter can be difficult to address.  We have huge hayracks with troughs underneath, so give haylage ad lib without having to worry about it being wasted; hard feed is also given although only high fibre cubes and rolled oats. They do have a huge shelter, but typically they hardly use it in the winter preferring instead to back up to the hedges which bound the fields. See feature image above – Horses cope with cold weather very well; it’s wet winter weather that pulls the condition off.

We are also very pleased with how Castle Feeds have performed for the stabled horses. This is the first winter we have not ever clipped any horses and this is because they just didn’t really grow enough coat to warrant clipping – not that we are complaining; some people enjoy clipping but we are not amongst them! One of the reasons we elected to use Castle Feeds was due to the higher oil content in the products we wished to feed and the fact that such oil was predominantly linseed [by far the best oil for horses] and the inclusion of Diamond V and Zinpro. This has been borne out by the soft, gleaming coats, supple skin and great hoof condition which all the horses are presenting.  Although the coat of the gelding pictured below is clearly changing, it can be seen that it resembles a summer coat; no showing yard tricks, just sensible rugging and great feed. Whilst stabled horses should be kept warm, over-rugging is damaging.  We elect to layer so it’s much easier to cope with temperature changes, especially when there are the extreme fluctuations as experienced this winter and rarely is a neck cover in evidence.  Keep the fibre content up and horses naturally keep warmer.

Since just before Christmas, the yard has predominantly been filled with horses in for rehoming, which has taken a bit of pressure off during a period punctuated by family issues to contend with, but all change next week as new horses start coming in for training and rehab – as well as more for rehoming!  Usually over the winter period, horses are brought for training clinics or we pop out to local ones, but we just haven’t had the time this season. This has been disappointing as it’s our chance to give help and advice to those who are unable to let their horses spend time with us.

We’re having to fit in quite a few meetings at the moment, covering an assortment of activities but primarily welfare which is the hot topic in BHA/RoR circles, so we are providing comment and observation on this. It’s great that David Skyes is being so pro-active in this department.  Checking on some of our rehomed horses is a very important part of the job. We’ve had two aborted attempts to head down to Ledbury to see how Berkeley Street is getting on with Sue Hookham and Matthew Ainsworth, but hopefully now the days are longer we can catch up with them both before too much longer.

One of our current inmates is an older horse that had had a very lengthy lay-off; his owner reported behavioural issues and “attitude”.  Due the horse having had such a long break at a time of life when he was best kept active, we had to carefully re-introduce exercise firstly to get everything moving and more supple and to reduce his waistline… how could a thoroughbred carry quite so much condition?!!

Plenty of attitude has been demonstrated, particularly when long-reining work was introduced! But as the days have gone by, we think he is secretly enjoying the mental stimulation. However, over the weeks his carriage and posture have not improved as we would have liked in that he carries himself in such a way which is actually curving his spine the wrong way (lordosis) which gives him the appearance of having a much shorter back than is actually the case. He is still tending to pull himself along rather than propel from behind, which means that we still have more muscle in front than should be the case. He does have a weakness through the left hind which isn’t helping, so now it’s time to introduce therabands to help him with his posture and proprioception.  Look out for an update next time.

A couple of weeks ago we posted about the importance of closely examining the mouth rather than just picking up on problem when quidding is noticed or there is unhappiness with the choice of bit.  Hopefully, everyone is aware of the need for dental checks twice a year but some horses do require more regular attention, especially if they have an over-shot maxilla or any kind of malocclusion.  One of our new arrivals had both and before we had chance to call the vet in to remove an offending tooth, the horse managed to catch the tooth and tear it even more forwards than it already was.  This all turned out to be a blessing in disguise as the misaligned tooth had a considerable amount of debris around its base which was causing infection into the gum; when the tooth was extracted a large piece of jaw bone came with it! 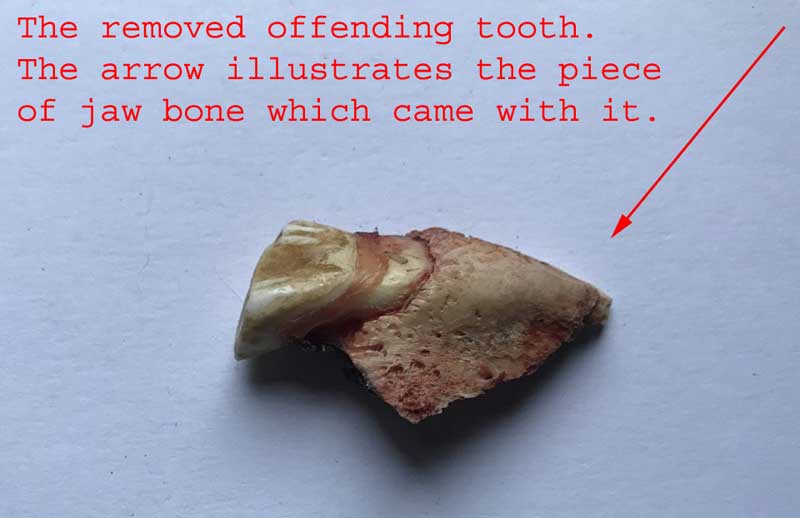 We are currently providing consultation across the Atlantic after being contacted for help by a lady regarding her two horses, one a kissing spine case and the other with fore limb lameness.  When someone contacts us from another country we know they must be feeling lost – it is a real cry for help. So there has been a flurry of emails, photos, videos, x-ray and scan results zooming through the airways these past few weeks, providing us with as much fact and evidence as possible. Of course, seeing a horse in the flesh is by far the best, but by requesting specific photographs and video clips we can usually pin-point what’s going wrong and why – then put together rehab programmes. We always work in conjunction with the consulting vets and also source appropriate practitioners for hands-on therapies, which can be quite a challenge in another country, so just as well we have plenty of contacts around the globe! We have worked with people as far away as Australia before now – never a dull moment!

January and February are two months filled with emails and phone calls galore as we undertake fundraising activities for the annual Raceday at Newbury for the Greatwood Charity. This year has been exceptional as we have rounded up some absolutely fabulous lots, including tours of Banstead and Shadwell Studs, Archery on Horseback, polo and a day with an aerobatics team. Thanks to the “beast from the East” and “Storm Emma” the day had to be postponed, which was probably just as well as we don’t think we would have been able to make it ourselves due to the difficulties so much snow was causing here! The new date is 21stt April for anyone interested in attending; being Greenham Day there will be some great racing.

Once again we have been very fortunate to get a private viewing of the Grand National trophies before they head off to Randox.  This year they have once again been produced by the talented Shannon O’Neill who is based just half a mile away at Burghley House.  The whole process is so interesting and last we heard Shannon was lined up to give a presentation to Women In Racing at Aintree, which we are sure those who attend will thoroughly enjoy.

Many of our followers will know that our beloved Binky has been unwell for a few weeks. Quite what struck him down we do not know, so it’s a worry that whatever it was could strike again. It’s hard not being too over-protective of him but we’ve got to let him do doggie things – or rather the quirky things that JRs do!! He’s having a check-up with his wonderful Physio, Emma Overend, next week which we know he is already looking forward to, so fingers crossed she doesn’t pick up on anything not being right; if it’s not Emma will find it!

It is a sad fact that many people are afraid of or afraid to make changes in their lives, but we are always looking forward, constantly researching to keep ahead of the game and improve what we do so as to give every horse the best possible care and training.  We don’t look back or live in the past – it’s firmly forwards for us! We think outside the box, will not be governed by convention, nor do things “just to please” and “yes” we do live life in the fast lane, but we work extremely hard and have issues in our personal life to cope with, so when we can we play hard too; life is not a rehearsal, we only have one go at it so give it your best shot.  Until next time  …….