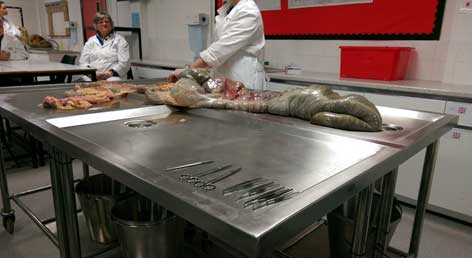 Most people who know me will know I’m an Equine Nutrition Nerd of the highest order. Equine Nutrition has been my passion for a long time now. I find everything about it fascinating and it’s the reason I spent 2 years doing my MSc in Equine Science which I completed last year.  So, when the opportunity arose to see an actual live digestive tract dissection (which incidentally I had never seen before), it was too good an opportunity to miss!!

The dissection took place in familiar surroundings – Hartpury College –  the place where I spent 2 years of my life slogging away for my Master’s Degree, but also meeting some wonderful people in the process and learning a great deal! The person responsible for carrying out the dissection was Heike Brown – Hartpury’s main Nutritional Expert – so we were in good hands!

As the digestive tract of probably no more than a 14 h pony was laid out in front of us, I was amazed at its sheer size size. But what struck me most was the size of the stomach – it is TINY in context to the rest of the digestive tract. Testament to why it’s so important to feed little and often I guess!

The stomach starts with the lower oesophageal sphincter where food passes into the stomach from the oesophagus and this ‘one-way valve’ is the reason horses can’t throw up! We were invited to put our fingers into it, which I did obviously – it was extremely muscular, strong and tight – no way any food is coming back up through there!!

When you look inside the equine stomach it is immediately apparent that it has 2 distinct sections: the squamous (top) section and the glandular (bottom) section, which are clearly defined by a line midway down the stomach called the ‘margo plicatus’.

The main difference between these 2 sections is the lining. The squamous lining is thick, dry and surprisingly wrinkled! This lining has absolutely no protection – it is completely bare and exposed, and feels very much like the back of your hand.  The glandular lining, on the other hand feels much thinner and very smooth, slimy even – the result of a protective mucus layer. The stomach ended with the pyloric sphincter, which was less tight (yes, I put my finger in that one too!) and this controls the flow of food into the small intestine.

The small intestine resembled a folded pipe and was longer than I expected it to be. But I guess that as it is the main site of enzymatic digestion and where all sugars, starch, fats and protein get broken down – it’s a busy little organ!! The lining was thin, to allow for full absorption of the products of digestion – glucose, fatty acids and amino acids into the bloodstream.

We were shown the 3 parts of the small intestine – the duodenum, jejunum and lastly the ileum which opens into the caecum. The feed in here gave us all an idea of what the horse had consumed, you could clearly see the bits of fibre and its colour led Heike to guess this pony had been fed on hay or haylage.  This fibrous material looked ready to travel on to the caecum for further break down.

Next in line in this fascinating journey down the equine digestive tract was the caecum – a large, blind and heavy looking sack which is home to billions of microbes who start the fermentation of fibre. Again, like the stomach, I was struck by its size, only this time by how BIG it was! Although it was how I had imagined i.e. very ‘sack’ like and I knew it was big from my training, I hadn’t imagined it quite as large.

The caecum is unique in that food enters and exits in the same place, with 2 openings next to each other, one covering the feed material coming in from the small intestine, the other letting said material exit into the large colon when its ready.

When the caecum was opened, a surprising amount of fluid was released – a good example of how the hindgut (caecum and colon) act as a fluid reservoir. When fibrous feeds are digested by microbes they release water, which is then held in the hindgut and re-absorbed when needed. The feed in the caecum was much more degraded and mashed up than it was the small intestine, a sign that the microbes had started their work – work which is continued along the large or ‘great’ colon – also home to billions of the little critters, and that was up next!

The Digestive Tract in all its glory!

The large colon is folded round into a double loop (a bit like a folded snake!) in the live horse and it has 3 major bends or ‘flexures’ which could be seen during the dissection. Heike told us these flexures are the major sites of colic in horses because feed material or ‘digesta’ can get stuck and then impacted there – reason enough then to make sure the hindgut and microbes are functioning well by feeding plenty of fibre!

When we had finished exploring the large colon, we moved onto the small colon, which compared to the large colon was indeed small! Interestingly, when it was opened the contents inside had obviously been subject to further, final microbial fermentation but in contrast to the caecum and colon they were now beginning to look more poo like! Moving on down into just before the rectum, the contents had formed into the characteristic faecal ‘balls’ for passing when the time was right.

All in all, this was a fascinating trip down the equine digestive tract, carried out expertly by Heike who was then bombarded with questions at the end, ranging from whether stress causes ulcers, to worming (as we had discovered a small collection of tapeworm sitting in the neck of the caecum!!).

It’s very eye-opening seeing it all in front of you and trying to picture how it all fits together! Even Heike struggled a little at some points with what was supposed to be where, so you can’t even begin to imagine what it’s like for a vet to try and figure out how to get it all back in there and where it all goes after surgery – I’d rather them than me!

Although a dissection of the equine guts would not be everyone’s cup of tea (and I guess you do need a strong ‘stomach’ to watch it), I loved it and it’s given me another goal – to eventually be the person doing the dissection and sharing my knowledge with other interested horse lovers, now that would be truly amazing ?

The Benefits Of Feeding Treats To Your Horse

Autumn brings with it beautiful colours and riding through bright, crisp leaves but as the…

Understanding Energy – Dispelling the Myths and Misconceptions You know the basics: Eat less and…